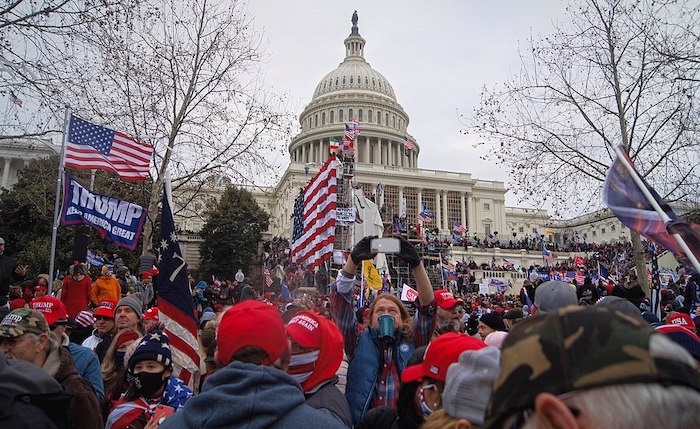 WASHINGTON (Jan. 5, 2022)—As the country grapples with the one-year anniversary of the attack on the United States Capitol, George Washington University offers up commentary across various academic fields on the status of America one year later. Please feel free to use these quotes in your stories.

To schedule an interview with an expert, please contact GW Media Relations at [email protected] or 202-994-6460.

You cannot burn down a house and then expect to live in it.

Last January’s insurrection should have been a reminder that words have consequences, and those consequences can include the demise of our national promise. Instead, the insurrection is seen by some as a way to raise more money and gain a marginal electoral advantage at the expense of politics itself.

Politicians, pundits and political advocates have an ethical responsibility to support, or at the very least not undermine, our democratic institutions. That means condemning those involved in the insurrection, investigating those who supported and encouraged it, and holding to account those responsible for the violent attack on our nation's capitol, the attempt to prevent the peaceful transfer of power, and the undermining of a free and fair election.

Statement from Silvio Waisbord, director of the School of Media and Public Affairs at the George Washington University:

A year after the rampage on the U.S Capitol, it’s important to be mindful of the symbolic power of the event. It is symbolically powerful for the mob that assaulted a sacred institution of U.S. democracy and for their supporters who justify and celebrate the use of force to access political power. January 6th, 2021 is the birth of a seditious movement that the country has not seen in modern times. The event also bears powerful symbolism for the majority of citizens who believe that democracy needs to be constantly nurtured and protected. Democracies don't always die a sudden death, but rather they perish out of the constant open and subtle attacks by its enemies and the complacency of bystanders. Much remains to be done to tackle the root causes that culminated in the insurrection, driven by absurd beliefs and stoked and blessed by political manipulators. January 6th should be a wake-up call to strengthen the foundations of U.S. democracy and to condemn anyone who espouses violence and hate to overthrow the popular will.

Statement from Lara Brown, director of the Graduate School of Political Management at the George Washington University

The insurrection on January 6th was not only a violent assault led by Trump supporters on members of Congress and the constitutional process that was underway, but an attack from the executive branch on the legislative branch. The evidence that has been revealed in the last year shows that former President Trump and members of his administration were actively collaborating with his supporters outside of government and around the country to put pressure on members of Congress and Vice President Pence to sow confusion and delay the certification of the electoral ballots transmitted by the states to Congress

Aside from all of the wrongdoing done that day by Trump supporters, the insurrection was, in many ways, an awful culmination of decades of anti-government and anti-Washington rhetoric that had become a staple of non-incumbent campaigns. Since the failures surrounding Vietnam and the lies associated with the Watergate scandal, Americans have come to distrust the federal government and those in Washington. While the destructive rhetoric that includes blanket allegations of widespread "corruption" and "rigging" by incumbents in Washington has been promulgated on both sides of the aisle, Republicans, especially since the 1990s and Newt Gingrich's tenure as Speaker of the House, have "run against Washington to run for power in Washington." Their language has been full of vitriol and former President Trump won the GOP nomination employing this invective against not only those in Washington or against Democrats, but against the elites in the Republican Party. President Trump's frequently violent and undemocratic rhetoric fueled the anger among his base for five years. His lie about the election's result tapped into the anger that has been evident on the Republican side of the aisle for two decades and culminated in the violent assault.

The Jan. 6 insurrection at the U.S. Capitol was an assault on democracy itself. That dark day revealed, among other things, the serious dangers that flowed from the politicization of the U.S. military during the Trump administration. The Pentagon dragged its feet in approving the use of the national guard to defend the Capitol, and at least five uniformed service members participated in the attacks. We must do more to ensure that the U.S. military is not misused for political purposes. The Pentagon's new anti-extremism policy is a good first step, but there is much more work to do, both to combat extremism within the ranks of the uniformed services and to ensure that military and civilian leaders do not use our armed forces for improper political ends.

Statement from Catherine A. Ross, professor of law at GW Law and author of A Right to Lie? Presidents, Other Liars, and the First Amendment:

On the anniversary of the January 6 insurrection – which we now know was just one weapon in an attempted coup – we perceive more clearly that January 6 was one of a number of early moves in a long-term strategy promoted by the Republican party: to restore Trump or his like to power, to undermine faith in our electoral system, and to manipulate laws governing districting, access to voting and who controls election results (voters, legislators or others) to seize and maintain political power.

The evidence already released to the public reveals the scope, intensity and planning regarding Trump’s efforts to overturn election results in the states and through the Department of Justice. It is urgent that we hold the movers, planners and leaders behind each attempt to overturn the 2020 election results to account, and that the penalties be serious.

The very mechanisms the constitutional structure provided for controlling would-be “Tyrants” (as the founders called them) are themselves in mortal danger. Congressional oversight is undermined when the Republicans stonewall and offer alternative facts, and even more so when witnesses simply refuse to comply with requests for documents and testimony, demonstrating outright contempt for inquiries from the January 6 Committee.

Statement from Rebekah Tromble, director of the Institute for Data, Democracy & Politics and associate professor at GW School of Media & Public Affairs

One year since the Capitol insurrection, it's disheartening to reflect on how little has changed. The same lies, the same hatred that spread on social media platforms, across right-wing media airwaves, and through the very halls of our democratic institutions continue to circulate. This is time for an "all-hands-on-deck" approach to securing American democracy. And yet efforts to understand what led to the insurrection and how we might avoid additional violence have been thwarted at every turn by many of those in power. From Facebook executives to Republican party leaders, this political moment requires courage. Unfortunately, we have seen more cowardice, grandstanding, and obfuscation than courage.